If you're new to all this, there's two ways to use a PS4 controller with Win10.
The first is to use Steams PS4 controller driver which becomes active only when you launch your game from Big Picture mode.

For most games, the Steam option works just fine as normally you don’t need to remap / swap the functions of the directional stick and the left and right trigger buttons (which the Steam driver does not support).

For the case of Assetto Corsa (and any other game for that matter) where you DO want to swap, DS4Windows is your answer.
First you will want to download Virtual Bus Driver and DS4Windows in that order.
To explain, the virtual bus driver is the actual driver / wrapper that makes the PS4 controller work natively in Windows 10 by mapping the PS4 buttons to the natively supported XBOX controller.
DS4Windows is a GUI which lets you use that driver easily as well as customise controller actions.
DS4Windows actually supports the download install of the Virtual Driver as part of the program however the link that it points to is often broken (due to quota being exceeded) hence why in this guide I’ve advised to download and install the virutal bus driver seperately.
Virtual Bus Driver:
https://web.archive.org/web/20170311022846/http://ds4windows.com/Files/Virtual%20Bus%20Driver.zip
DS4Windows:
https://ryochan7.github.io/ds4windows-site/


After using DS4Windows for a while, I’ve found a one key default option you will want to change.

Under the settings tab, check the box “Disconnect from BT when stopping”.

This does two things - it saves your controller battery when you’re not using it.

The main reason though is to stop DS4 conflicting with the steam driver.
Without this checkbox ticked, if you launch a Steam game from Big Picture mode, there are two active PS4 controller drivers which wreaks havoc with games such as causing double input, second players randomly joining games etc.

Create a custom DS4Windows profile for Assetto Corsa remapping Right and Left Trigger and Right Analogue Stick.
Ok - now the bit you’ve all been waiting for.
In DS4Windows, click the profile tab and select create new profile.
Give the profile a name and carefully hover your mouse over the right thumb stick where the stick would be when pushed up and you should see the text "RS-Up: Right Y-Axis-".
Click and you will be given the option to change the mapping.
Click "Right Trigger" and close the window and then click save profile.
Now repeat for the down thumbstick action and map it to the left trigger. 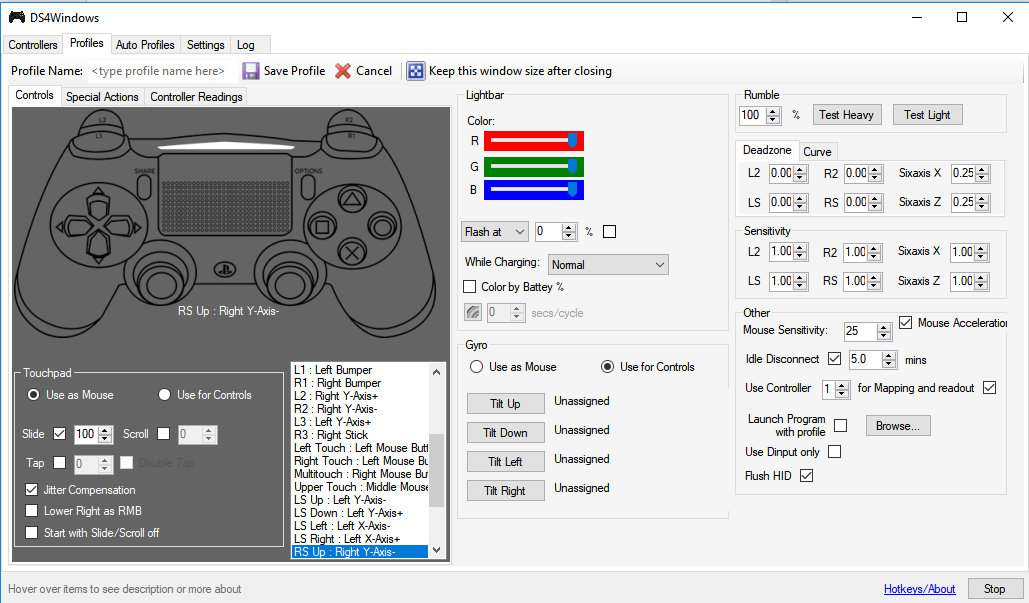